The Pugh’s Earthworks team takes pride in performance and professionalism

Pugh’s Earthworks is one of the Mid South’ s leading commercial landscape installation and maintenance companies. Pugh’s Earthworks provides the highest quality landscaping services available. We are Memphis landscape maintenance experts. Our team is committed to acting with the utmost of integrity with our business operations and for clients and the communities we serve. Every job we do is backed by our 100% customer satisfaction guarantee.

We are one of the largest landscape design, installation and maintenance firms in the Mid South area. Our clients include some of the premier office buildings, hotels, hospitals, churches and cemeteries in the cities we operate. In addition to the commercial customers we serve, we also provide landscape services for Home Owners Associations, Condo Owners Associations and individual residential home owners as well. Our staff has years of experience and can handle projects of any size.

Pugh’s Earthworks was originally started by Mark Pugh. Our firm has been in business since 1992. Over the past 25 years, we have grown rapidly. In all that time and throughout all that growth, we have remained true to our motto, Big Company Strength, Small Company Values! Regardless of the size of the client we are working for, our staff will deliver the best possible service, while treating each client with the utmost of respect. In a word, “We Love Our Customers” and “We Appreciate The Opportunity To Serve.”

The Pugh’s Earthworks team takes pride in performance and professionalism! 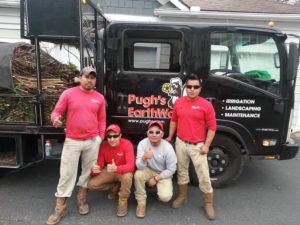 No matter what industry you are in, medical, legal, banking, education, landscaping etc., looking the part is important. The professionals at Pugh’s Earthworks realize that doing a great job at landscape design and seasonal maintenance is critical to set us apart from the competition. However, we also realize that showing up on the job site in torn jeans or dirty t shirts is not acceptable. We are in the commercial landscaping business and our job sites are at numerous businesses that must present a professional image to their clients.

The Pugh’s Earthworks team wears appropriate landscaping attire that presents well and also proudly displays our name. Not just our employees look the part but we take pride in our trucks and our equipment. Mowers have sharpened blades, trucks are clean and trimming equipment is well maintained.

An excerpt from the Landscaping Magazine also speaks to the importance of dressing for the part:

Bill Smith, a branch manager at Grassmaster Plus in Massachusetts, acknowledges landscaping is a dirty job. They provide their employees six T-shirts on rotation, so they have a clean shirt to wear each day they work, while giving them the opportunity to wash the clothes on Sundays. In total, it costs them about $2,000 annually.

“You open up your closet and you see your work stuff and the stuff you’re going to wear on the weekend. Why can’t we intersect the two things and be really proud of (your company)?” Joseph Stark, marketing director, Ground Works Land Design

“It’s not a business that you stay clean in, but if you start the day clean… the attitude of the technician is better,” he says. “They identify with the colors, with the uniform itself. And customers have a higher comfort level because they see the truck pull up and the guy get out in full uniform as opposed to the ripped jeans, the hood up, etc.”

Smith estimates Grassmaster does 80% commercial work, so he also reiterates the importance of appearance. In some cases, they actually need to follow state guidelines with their uniforms, as technicians handling chemicals need to wear long sleeves. They wear a moisture-wicking pullover with the logo placed on the breast and on the back, plus some dark green hoodies with the logo on the front and back as well.

“I look at every employee as they come in,” he says. “They’re not allowed to go out without a belt. They have to have the hat on straight forward. There’s no cutting sleeves or opening up the necklines. (The uniform) has to be as given to them.”

For Smith, it all ties into Nasrallah’s principle belief: If you feel good, you’ll act good, which means the clients will pay good. This year, the average project earned $160,000 at Ground Works, and Nasrallah says part of it had to do with the company’s appearance.

Rachel Kukhahn has owned her company, Premier Landcare in the state of Washington, for just over two years, but at previous companies, uniforms were important there, too. She doesn’t want any clients wondering who’s creeping around on their porch or standing in their yards – uniforms bring a sense of identity for the employees.

“I like the clean look of it,” she says. “I like that all of my guys are identifiable on site.”

Kukhahn says she’s a small enough company that she can afford to pay for all of her team’s uniforms, which includes five shirts, five pairs of pants, a hat and a coat. Meanwhile, Nasrallah provides all of their team’s uniforms as well, and he says it costs more to recruit and retain employees than it would be buying uniforms, so he wants to keep all of his roughly 25 employees happy. Smith says he purchases all but the pants for the employees.

“It’s not a business that you stay clean in, but if you start the day clean… the attitude of the technician is better.” Bill Smith, branch manager, Grassmaster Plus in Massachusetts

Smith adds that he understands why some companies have their employees purchase their own uniforms – it can bring an emphasis on keeping those uniforms spotless, for example. But he wants to ensure starting at his company is as seamless as possible.

“It’s no money out of their pocket. A lot of times when we get a new hire and they’re starting on the entry level, they may not have the cash to go out and buy something that we’re pretty much dictating what they’re going to be able to get,” Smith says. “It takes some pressure off of them. They view it as a benefit.”

Replacing the uniforms is something else employers need to consider, as the uniforms go through plenty of wear and tear out in the field. Smith says it’s pretty common that he’ll walk past an employee, take off his beat-up, worn hat, and hand him a new one. Kukhahn says even sun exposure is something to consider, as she replaces a T-shirt or two each year from each employee because the sun washes out their “Seahawks-ish” colors of dark blue and green.

But she doesn’t let ripping uniforms become a reason why employees don’t wear them. She says she’s had to talk with her employees several times over the last two years about making sure the uniform looks good before they head out into the field.

“Trying to enforce the uniform is a challenge at times as well,” Kukhahn says. “I’ve heard a lot of excuses as to why they didn’t wear their uniforms, like the buttons fell off all of his pants, or the seams ripped out of all of his pants. It just gets creative. You name it, it’s been used.”

Stark says uniforms have always been important at Ground Works, but now that they’ve implemented the marketing department, they can make it a focus. He’s been on the staff for less than a year, but he’s noticed in previous pictures that the company has made uniforms a “walking advertisement” for several years prior.

“You open up your closet and you see your work stuff and the stuff you’re going to wear on the weekend,” he says. “Why can’t we intersect the two things and be really proud of (your company)? It comes from this idea of blending work and play.”

Nasrallah says uniforms matter so much to him and the Ground Works team because they take it personally – in a good way.

“They’re representing Ground Works when they’re out there, and their representation is a reflection of who I am and the company culture,” Nasrallah says.

For Smith, uniforms are also about having his team buy in to the company culture. It’s somewhat like an athlete wearing his or her team’s uniform for the first time: Though it’s probably a little less exciting than that, it is fulfilling, especially when the employees are proud to don that company apparel.

“I think when we present that as part of our interview that we supply the uniforms, there’s not a big reaction at the interview process,” Smith says. “Once they’re in and we hand them their uniforms though, it just makes you feel like you’re part of the team.”

When you hire Pugh’s Earthworks as your professional landscaping company, you will be hiring a top notch firm.

Pugh’s Earthworks has all the proper credentials, degrees and certifications necessary to deliver top quality landscape and lawn maintenance design, installation and maintenance services. Our team is experienced, highly skilled. The all operate with a customer first attitude.

We operate 5 landscape centers, in 3 states.

Our headquarters is in Memphis, Tennessee. We also operate landscape offices in Nashville, Jackson TN, Southaven MS and Little Rock AR. Our firm provides monthly grounds maintenance services for commercial clients. If you are seeking assistance with Landscaping or Lawn Maintenance services, please give us a call or send us a message via the contact form below. We do offer FREE Estimates.

Thank you for reading our blog.